A Brand New Aladdin Hits The Road In 2021 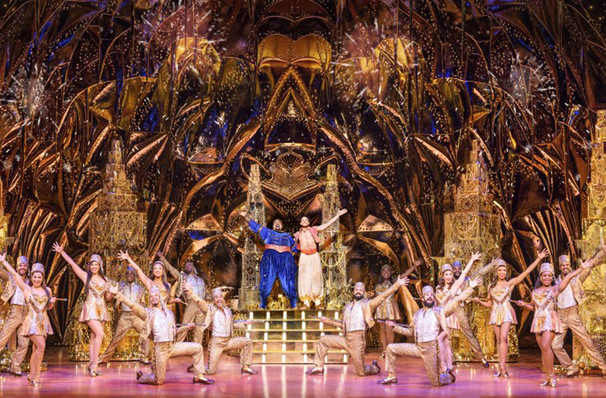 Don't miss your chance to see the original touring production of Aladdin this season as a brand new version of the Disney classic is set to hit the road in 2021! The current tour will play its final performance in Kansas City on April 26, 2020.

Dinsey has announced that they will be re-tooling the Tony-winning musical's touring production in the hope that even more venues across North America can accommodate the grand production, and that more people than ever before can enjoy Aladdin on tour!

Official dates, venues and casting for the newly-configured tour will be announced at a later date. We'll update this page as soon as we have more information.

What is Aladdin about?

Aladdin is a charming street urchin in Agrabah, who, when 'exploring' the mysterious Cave of Wonders, uncovers an ancient lamp that proves to be more than just a lighting solution. He unwittingly frees the lamp's resident wacky Genie, who grants him three wishes. Transformed from pauper to Prince, Aladdin catches the eye of beautiful but bored Princess Jasmine, who longs for some adventure of her own!

But it's not all a smooth magic carpet ride, because Aladdin isn't the only one that knows of the lamp's power. Enter the nefarious Jafar and his minions, who have plans for three wishes of their own and it's up to Aladdin to defeat him to keep the Kingdom from his clutches.

Aladdin is now on tour across North America!

Broadway's most extravagant musical is out on tour! Based on the beloved movie of the same name, Aladdin follows a plucky young hero as he tries to win the heart of Princess Jasmine and keep his magic...more info

Sound good to you? Share this page on social media and let your friends know about it.