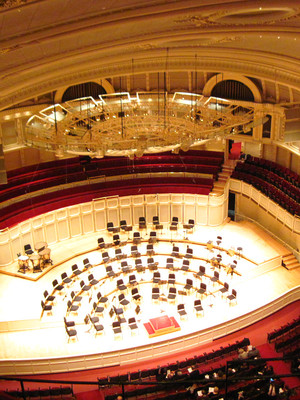 If you're happy to travel

Itzhak Perlman is also touring to:

Even after you've stepped away from the grandeur and dim lighting, you wonder how he made it look and sound so effortless.

A classical violinist with superstar status, Itzhak Perlman has been delighting Toronto audiences since his local debut at Massey Hall in 1970. His irrepressible joy for making music is demonstrated in the range of his commitments, from guest-starring on Sesame Street to performing at President Barack Obama's inauguration.

A talented player by the age of 10, he first performed on television at 13 years old on The Ed Sullivan Show in 1958, and in the same year attended Juilliard School, studying under some of violin's greatest players. His work is varied, from traditional Jewish music, to working with John Williams on some of the most iconic movie scores in today's cinema including for Schindler's List and Memoirs of a Geisha.

His live orchestra performances are highly acclaimed and much coveted, having played with many of the most esteemed orchestras from across the world and has performed the iconic greats such as Dvorak, Mozart, Brahms, Vivaldi and Beethoven, and collaborated with contemporary legends like Emmanuel Ax, Yo-Yo Ma, Kathleen Battle, Yitzchak Meir Helfgot and Placido Domingo.

You may be required to wear a mask during this performance. Please contact the venue directly for more information.

Vanessa: “So beautiful and mesmerizing…”

I went to the “Evening with Itzhak Perlman” violin concert two months... more

Sound good to you? Share this page on social media and let your friends know about Itzhak Perlman at Cobb Great Hall.